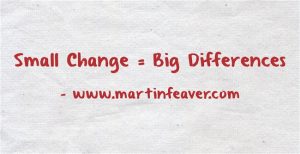 This isn’t one of those get slim quick adverts though it is possible to lose 12 pounds of fat easily. Just not quickly.

In a recent session a client, I’ll call him George, mentioned he wanted to be healthier and lose a stone in weight – that’s 6.35 kg. Talking about possible changes George decided he’d do this by looking at his nutrition.

Everyday he has a cup of tea and three biscuits every morning and afternoon. George’s first thought was to stop having biscuits. It sounds a great idea right? I suggested this was too big a change. He was puzzled. For new habits to form and permanent change happen small, tiny changes are the key. They are manageable, you’ll stick with them and they quickly become integrated into your daily routines. Too big and change feels too hard and it’s unlikely to happen.

Time for a rethink. Starting with the tiniest change, George decided he’d only have two biscuits  rather than his usual three with his morning and afternoon cups of tea. It doesn’t sound much of a change does it? This is what it would actually result in.

He would be eating 730 biscuits less over the year. With each biscuit being 60 calories that’s  43800 calories per year which is approximately 12.5 pounds of fat! Simply by reducing two biscuits a day he would nearly hit his goal of losing a stone in weight in a year with really surprisingly little effort!! He was amazed by this realisation. I was as well. It was certainly food for thought! Small change, big differences.

It’s so easy to think too big when you want to reach a goal. Any goal.

It doesn’t matter if you decide you want to take up running and set your sights on the London Marathon probably before you’ve even bought a pair of running shoes. Maybe you’re thinking you’re carrying too much weight for your dream trip to the Caribbean in August and resolve to become healthier and loose 15kgs by cutting out carbs or stopping drinking alcohol. It makes no difference.

Both of these are great goals and would feel amazing if they were reached. The likelihood of that happening though isn’t high. Why? They are too big and too far into the future to feel achievable and there’s a possibility, a strong possibility, you’d quickly become frustrated at your progress, or lack of it, and give up. There are many steps along the way to running the London Marathon, losing 15kgs or anything else and this is where your success in reaching your goal, any goal, ultimately lies.

By creating bite sized mini goals and habits that give you frequent and regular feelings of achievement and success along the way you are more likely to make a bigger, longer term goal happen. And the smaller your mini goals and habits the more opportunities you’ll have to receive hits of dopamine, serotonin and endorphin – known as the ‘happiness hormones’ – to keep you on track. Every time George has his regular cups of tea with two biscuits he’s getting the buzz of success. That’s everyday, twice a day. He even looks forward to his cup of tea more than before!

Not only do small changes and mini goals make your big goal more likely to happen they also make a huge difference to how you feel on your pathway towards your goal.

Here’s one way of using mini goals towards becoming a runner and completing the London Marathon. Mini goals can be broken down as much as you like if you struggle to get started or stay on track. The effort in breaking them down is never wasted.

It may look like it’s going to take forever to be ready to run the London Marathon. It may take longer than you want though this approach means you are increasing the possibilities of your big goal actually happening rather than only focusing on your big goal itself. It pretty much comes down to a choice between making your goal later or not at all.

The reality is as you make one change, other changes start to happen. You begin to create habits, that lead to more habits, that together move you continually towards your mini goal and eventually your bigger goal. You are working for you and not against you. George hasn’t stopped his changes by only reducing his biscuits!

Your successes ensure you are frequently winning and getting regular doses of the ‘feel good’ chemicals to keep you on track and stop you giving up rather than waiting solely for the ‘buzz’ of marathon day. There’s even a bonus because in the process you become a runner rather than focusing only on running the London Marathon. You’ll achieve your big goal and more besides!

It’s easy to dismiss little changes and mini goals as being long winded and not being worth it when they are the very keys to making the big differences you want to have in your life. They may take longer than you ideally want though the likelihood of you succeeding when compared to solely focusing on your big goal far outweighs that.

Anyone ready for a cup of tea?

An update “I have stopped taking sugar in hot drinks and definitely reduced the biscuits so I am pleased with that. A few times over the last fortnight we have not finished a bottle of wine so that’s improving. We also have a couple of wine free days which was not the case for the first few weeks of Lockdown. I think I want immediate results but have to be patient. Mentally I am feeling great, still walking 5 days a week and have been doing a range of online workouts once or twice per week.” (George’s words)

The power of small habits to make a big difference!

A Sugar Hangover During Lockdown 2.0

The Wise Old Goose…and the Pandemic