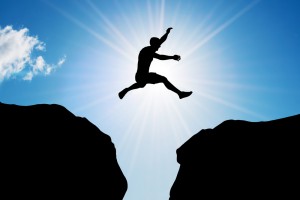 All of us take leaps of faith in our lives. It may not seem like it though its a fact. Life doesn’t offer guarantees.

On Wednesday the 10th February 2016, I took a leap of faith. Actually, it didn’t seem much of a leap at the time. I do know I was uncertain of the outcome. That’s what comes from making a leap knowingly…that you are vulnerable. For years I believed vulnerability was to be avoided at all costs. Nowadays I see it as empowering.

The leap of faith? I sent a text to a client. I know it probably doesn’t sound like a ‘giant leap for mankind’. Leaps aren’t relative though. Your leap and mine can’t be compared.

Although I’d known James for a while, my social niceties meant I was reluctant to impose and I had that cringing feeling of over stepping the mark. Maybe its an English thing? Ultimately its vulnerability. Letting yourself be seen.

James had asked if he could call me after he completed the event he was doing in Northern Ireland called Last One Standing. Competitors start at 12 noon and then have an hour to complete the 4.2 mile circuit before having to complete it again. This goes on every hour until 48 hours are up or there is only one runner left. Hence the Last One Standing. James’ target was at least 24 hours so he’d cover 100 miles.

I’d agreed to James calling me. He’d had lots of people tell him he was mad and needed committing. I didn’t. In the time I’d known James I knew he certainly wasn’t mad. He is passionate about exploring and discovering himself and a man that has made many leaps of faith.

My text was brief…’Was going to ask about Belfast. Mad thought of being your support crew’. That’s the thing about leaps of faith. They often begin with the smallest shift within ourselves and deciding to take a chance.

James was grateful and agreed. He’d wanted to ask me and then felt the same reservations I’d been feeling so he’d let it drop. My role was discussed along with the logistics. I was to be coach, therapist, mate, caterer, dogsbody and whatever else was needed. Perhaps most of all I’d be there! 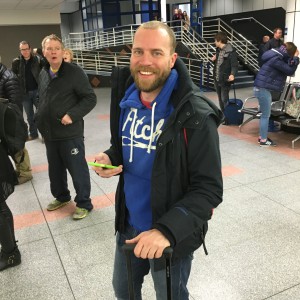 Last One Standing took place last weekend in the beautiful setting of Castle Ward near Belfast. The omens were good.

The flight over had been a breeze and the ladies at the car hire desk laughed with us at our banter and gave us an upgrade on our car. The weather forecast was dry.

The car was prepared ready for the 24 hourly change overs that would be part of the event with food, clothes and numerous supplies. A stroll to the start and mingling with the other competitors. I heard a man mention that he thought he was the only Englishman taking part. I started talking with Nick and his wife, Jenny, letting them know he was not alone. That connection was one of the many that made the event so powerful as the day – and night – wore on.

The clock came up to noon and the first lap began. This pattern of crossing the line very hour would be repeated many times before there was a Last One Standing. Each runner had their own planned goal. Some would make their six laps, 12 hours, 100 kms, two marathons. Others would find injury or fatigue took over and they’d collect their Did Not Finish medal sooner than they’d have liked.

I was struck instantly by the camaraderie of the competitors, their supporters and the organisers. A sense of all being in it together. The laps passed. It drizzled and dried. The night running started. From 104 numbers dwindled. Sometimes a few, others a chunk. 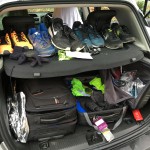 My role developed into waiting for 45 minutes whilst James did his lap and then serving his needs – a drink, food, blanket, muscle activation, arm round the shoulder, leaving him in the car for a ten minute power nap… I am eternally grateful for our car hire ladies whose upgrade meant a boot large enough to store the gear in and James being able to slide in and out when he used the car rather than squeezing down into low level seats – not great for stiff tired legs!

I had to leave him for two laps to book out of our hotel. I asked about leaving a bag for James with dry gear in the communal food tent. Katherine stepped up and told me she’d look after him each lap. Jenny let me know that she’d be there for James as well even though her own husband was still running. I admit tears came close at such kindness.

They weren’t to be the last acts of sharing. There were many conversations that touched me. David, another supporter of a runner, opened the boot of his estate car and told me James could have whatever he wanted whenever he wanted. When I led James to that car rather than our own at the end of the next lap you’d have thought I’d given him all his Christmases at once!

Jenny offered me a bed for the night. Pete doing the hot catering asked how he could help the runners do their best. Food, drinks and caring conversation were in abundance. When the runners returned they were our focus. When they left we reunited into our preparations for the next lap and support for each other. 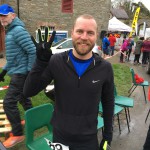 The runners themselves became a tight knit group. They chatted and encouraged each other. They were all in it together. On one night time lap, James was aware of a runner close by. When he paused to let him through the man told him to keep going as his own head torch had gone out and he was using James’.

During that long night, there was such support and camaraderie between those ‘left behind’ after each lap started and between the runners and the rest of ‘us’ when they returned. The casual chats, the sharing of vulnerabilities, the respect. Humanity at its best.

I cat napped. The laps counted up. By 6 am there was daylight after 14 hours of darkness. Daylight bought more people to come and watch. With the daylight came the rain. No one moaned. The weather had been extraordinarily kind according to the locals.

By 11am on Sunday there was such excitement in the air as the last lap got under way. I’ll let James take over… 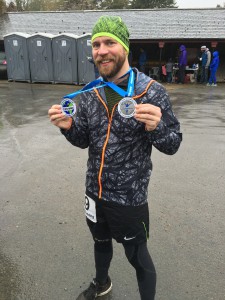 ’11 people toed the start line. This was it… I just had to get around within the hour. Only one more time up the hills. One more time through the puddles. One more time under the bridge and one more time across the finish line… Those first few steps over the start were always the hardest as the muscles had started to seize up from the waiting. Getting them moving again was painful… But I knew by the time I got to the boats they would have eased back in. I might not have had that magic halfway feeling at midnight. But there were parts of the course I knew would be a struggle and parts that I looked forward to, like achievements. The boats were my first achievement on each lap. Run all the way to the grass bank was my second achievement. Get to the road, that was about a mile in and my third achievement. Under the bridge with the supporters on top. I would reward myself with a snack during the big hill up to the house. I’d then walk a little at the top. That was around half way. Getting to the end of the road and turning left to the mud track was an achievement. It was pretty much down hill from there… Past the caravans – the muddy downhill stretch was over. Onto the water front – this was long and winding – but the home stretch. Traversing the 2 big puddles and I can hear the music at the finish area in the distance. Last puddle by the car park and up the last bank – through the gates and I can see the flags. I can see the support crews. I can hear the cheers… I’ve bloody done it.’

There were medals, back slaps, applause, strangers congratulating those who’d run 100 miles in 24 hours. Jenny was there along with Nick who’d pulled out earlier than he’d wanted, Katherine supporting James on the laps I wasn’t around for, David with his car that was a virtual food hamper, Pete the caterer and so many others.

There were those glances between all of us acknowledging what had happened in the past twenty four hours. We knew. Each of our experiences unique and yet all sharing a common one as well.

My priority was getting James to the hotel. He was in remarkably good shape considering all he’d been through. The fatigue rushed in quickly though. The ridiculousness of not being certain of sending him that the text asking if he wanted support him to now getting him out of wet gear and dressing him in warm clothes made me smile.

James was staying a couple more days and I left him that night in his Belfast hotel. He’d started to recover with legs up, a bath, nap and a treatment from me. I had work the next day. Before I left, James and I had dinner. 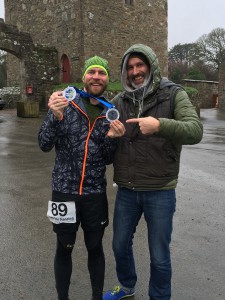 We shared our own experiences of the weekend. We knew each other and ourselves better. Somehow life would never be the same. I hadn’t run one step yet I had been on an incredible journey.

Sometimes you know something has changed. Words can’t describe it. It’s a feeling. The weekend did that and it began with a leap of faith. In reality the whole adventure was a wonderful series of leaps of faith into the unknown. Just like life is really.

The feeling has stayed as well. Life feels renewed and I’m buzzing from being part of an experience that showed the power of people connecting authentically and openly.

We can believe that taking a leap of faith is a huge risk. Funnily enough we do it every single day and often aren’t even aware of it.

We have faith drivers will stay on their side of the road, that our train will get us to our destination, that we’ll get paid at the end of each month or that our friends will meet us at the pub. There is no certainty even though we try and convince ourselves there is. Life unfolds.

For me a leap of faith is uncertainty, being willing and conscious you are taking it. It is being open to possibilities rather than defined outcomes. There is both vulnerability and potential. Above all a leap of faith means there is the probability of change, living in the present moment and trust you will handle your landing. Though leaping has its risks it also has its rewards!

Ready for your own leap of faith?

It’s Not About the Toilet Paper

This site uses Akismet to reduce spam. Learn how your comment data is processed.